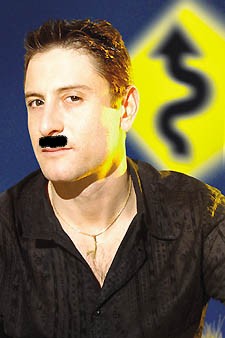 Exgays huddled in the massive ghettos of Anytown, USA had better beware.

The trains are rolling in. The furnaces have been tested and the ex-ex-gay, --XXtroopers-- have their marching orders via the supreme commander of anti-exgay forces in America, Herr Wayne Besen.

"They took away my Calvin Klein underwear," complained Wade Richards, who attended Exodus International's "Love In Action" retreat. Richards said camp counselors believed there "seemed to be more of a sex appeal [issue] for men to wear Calvin Klein than it would if they wore Fruit of the Loom."

In response to this atrocious treatment,Herr Besen has, well, cleverly xeroxed a plan to once and for all nail the coffin shut on exgays and their evil ministries which have left death, destruction and generally unhappy gays in their wake for over 30 years. But never fear. Besen has come to save all of America from this festering evil swarm of human rodents.

June 8th, from the National Press Club, Besen launched his Final Solution in dealing with the "exgay problem". Gathering together a team of disgruntled failed 'ex-exgays' (with curious hairdos and pedophilia flavored poses), weepy gay mothers and a hard nosed doctor, Besen lashed out at former homosexuals, blaming them for much of the evils which have befallen poor homosexuals in America.

Wayne Besen's Final solution (WBFS) Truth Wins Out (TWO) is for all accounts exgaywatch with shark teeth. Along with a 10 point plan to expose, root out and if possible imprison former homosexuals and supporters, Besen seems to have finally found the trigger to his uncontrollable desire to rid the world of exgays. Interestingly enough the decision to move forward with the extermination battle against "right wingers and exgay ministries" came when Besen's anger was pushed over the edge. He cited the White House invite of Exodus International President Alan Chambers and Randy Thomas,the organization's media director to a 10 minute press briefing on the failed Marriage Amendment as the straw that broke the camel's back. Besen himself has never been invited to the White House. He apparently saw this as a official sanctioning of the evil exgays who travel the nation with a "full time staff of 12" corrupting the progay moralities of good Americans.

Enough! He fumed to himself. I will once and for all stop these exgays and lift America to its rightful place where homosexuality is valued above heterosexuality and gay marriage is the law of the land! And thus, secure his place on the hallowed pages of American history books. Herr Besen's strong aversion to exgays seem to stem from a belief of gay purity. That is to say one can only be worthy of his respect if they are pure gays. Consequently, these men and women who have left homosexuality are traitors and orientation mixers who deserve nothing but scorn and uhh "resettlement" back to gay life via his 10 point plan. If they refuse to go back to being gay, the infamous, drug infested Fire Island Circuit Party Camps await them.

In the press conference, Besen (of Jewish descent) claimed that exgay ministries could not be trusted or tolerated in our tolerant society. To back up those claims he presented evidence that exgay leaders invariably go back to being gay. Richard Cohen, John Paulk, Michael Johnston and uhhhh those two guys who "fell in love" left their wives, got AIDS and lived happily ever after. Proof positive, he asserted that exgay ministries were shameless snake oil salesmen.

We will examine Besen's "10 Point Plan" in a separate post.