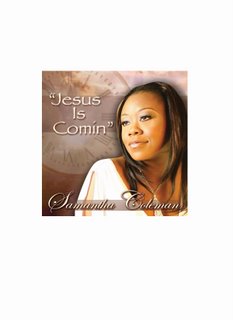 Jesus really is coming back, yall.
That's the message Evangelist Samantha Coleman of Atlanta is pushing real hard in her new CD single which is already enjoying top 10 radio airplay in select markets. The full CD, entitled For Such A Time as This drops on September 12th. The CD is being released on the Glory With Volume label. I've known Samantha for over a year and she is one passionate young lady. God delivered her out of a hard gangsta rap lifestyle. But that aint all. She came out of lesbianism too and get this: one of the hottest cuts on the CD is her testimony, Funny Valentine. FV was remixed for such a time as this. Its got a groove that's tight and a message that's even tighter. Now, Im no music critic, but that song is smokin'! 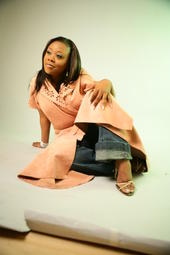 Samantha is on a mission to spread the good news worldwide. On the move and and on the go for Jesus, she performed at the “Yes, I Can Ministries” conference in Baton Rogue in front of an audience of over a thousand enthusiastic youth. She was spotlighted at the 2nd Annual Urban IMPACT Summit on June 25 through June 27 at Foxwoods Casino in Connecticut. On July 8th, she (along with me and other black exgays) ministered at the New Birth Missionary Baptist Church in Atlanta about her former lifestyle. And on August 5 she appeared at CeCe Winans’ “Always Sisters Always Friends” conference in Nashville.